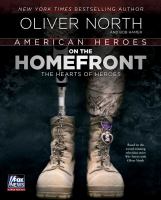 American heroes on the homefront : the hearts of heroes / Oliver North with Bob Hamer.

These are the stories of American soldiers who have traveled to the frontlines of the War on Terror.  Oliver North and his documentary team follow them from the battlefield to the Homefront, documenting their bravery and spiritual strength.  He shows us what an inspiration they are in the face of adversity and gives us an understanding of what our soldiers have endured for our great country.

What have we done : the moral injury of our longest wars / David Wood.

Most Americans are now familiar with PTSD (post-traumatic stress disorder) and its prevalence among troops. In this groundbreaking new book, David Wood examines the far more pervasive yet less understood experience of those we send to war: moral injury, the violation of our fundamental values of right and wrong that so often occurs in the impossible moral dilemmas of modern conflict. It is a call to listen intently to our newest generation of veterans, and to ponder the inevitable human costs of putting American "boots on the ground" as new wars approach, -- adapted from book jacket.

The long walk : a story of war and the life that follows / Brian Castner.

TBrian Castner served three tours of duty in the Middle East, two of them as the commander of an Explosive Ordnance Disposal unit in Iraq. Days and nights he and his team would venture forth in heavily armed convoys from their Forward Operating Base to engage in the nerve-racking yet strangely exhilarating work of either disarming the deadly improvised explosive devices that had been discovered, or picking up the pieces when the alert came too late.

The burn pits : the poisoning of America's soldiers / Joseph Hickman

A book about thousands of American soldiers that were afflicted with rare cancers and respiratory diseases directly related to "burn pits" that were on the military bases.  The smoke and ash that came out the pits were from the incineration of toxic chemicals such as, mustard gas, sarin gas and medical waste.  They were victims of their own military commanders who knowingly allowed them to be exposed to these toxic chemicals. 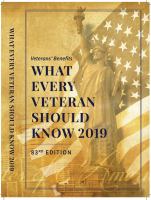 What every veteran should know.

Just-published to include all 2018 legislation. Provides information on benefits and services for veterans, covering such topics as healthcare, education benefits, life insurance, military pay, overseas benefits, and home loan guarantees.

Chicken soup for the veteran's soul : stories to stir the pride and honor the courage of our veterans / [compiled by] Jack Canfield, Mark Victor Hansen, Sidney R. Slagter.

Chicken Soup for the Veteran's Soul will inspire and touch any veterans and their families, and allow others to appreciate the freedom for which they fought. A compelling collection of the true-life experiences of extraordinary men and women in every branch of service, who changed the course of history by their acts of valor in World War II, the Korean War, Vietnam and the Persian Gulf War. Their experiences offer a glimpse of timeless history, revealing moments of compassion, bravery, respect and reverence. With chapters on Above and Beyond, The Home Front, The Front Lines, Coming Home, Healing, Brothers in Arms and Honoring Those Who Served, this collection relays heroic deeds, acts of compassion and empathy, fears confronted, and victories attained. This is a wonderful tribute to anyone who gave in service to their country, as well as to their families.

A book about job hunting for veterans.

Mission transition : navigating the opportunities and obstacles to your post-military career / a book by Matthew J. Louis.

Mission transition : managing your career and your retirement / Janet I. Farley.

The changing definition of retirement in the military -- Retirement: one word. two definitions -- A crash course plus in the blended retirement system (BRS) -- Moving from where you are to where you want to be -- Living in the space between military and civilian worlds -- Job hunting 101: practical tips to help you get hired -- Making your new normal work -- Strategies for success on the new job -- Conclusion.