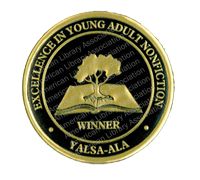 YALSA's Award for Excellence in Nonfiction honors the best nonfiction book published for young adults (ages 12-18) during a Nov. 1 – Oct. 31 publishing year. The winner is announced annually at the ALA Youth Media Awards, with a shortlist of up to five titles named the first week of December. Click here to visit the official website and view additional reading lists.