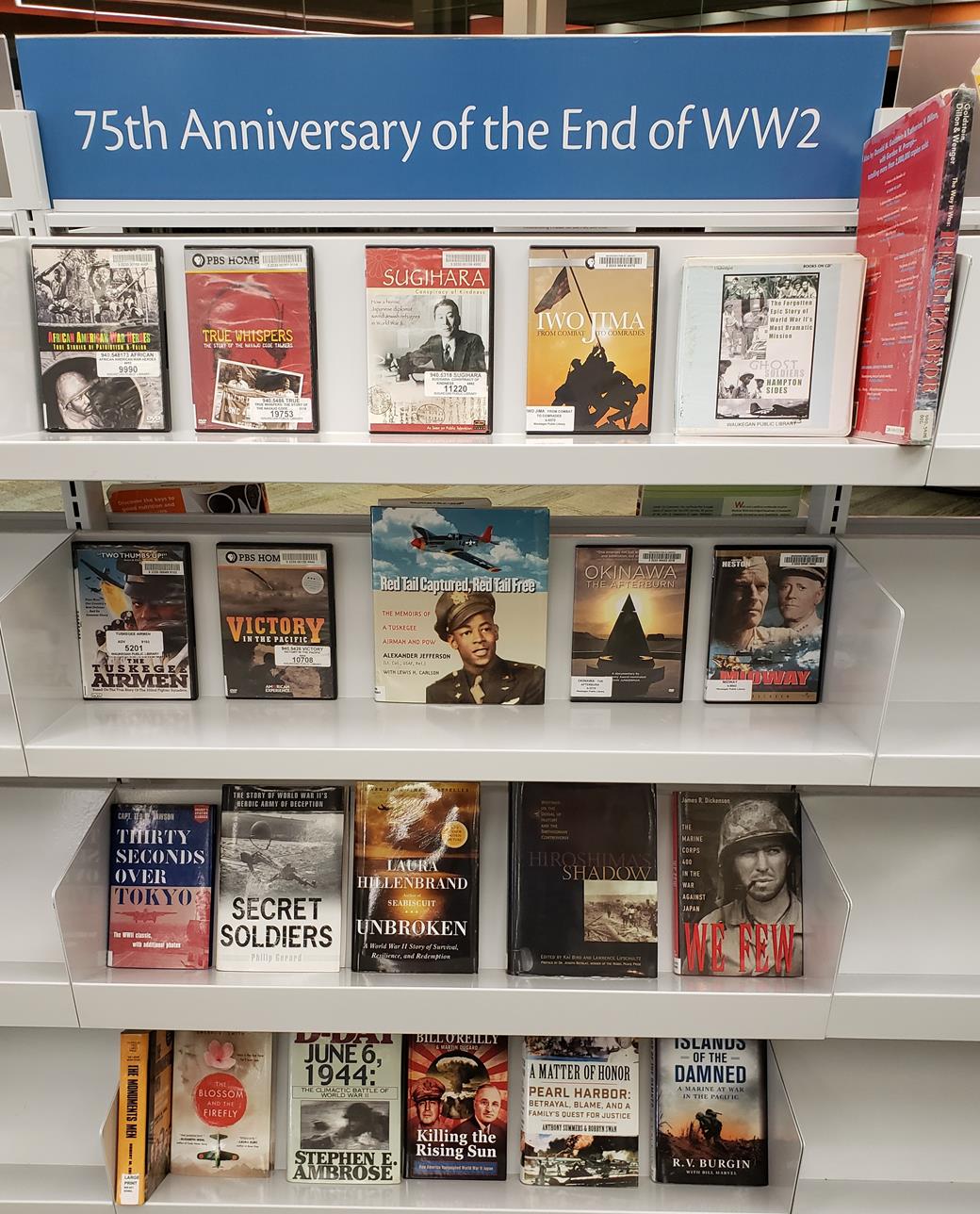 Online books can be found on Hoopla, Overdrive, and Freading.

The Tuskegee Airmen
It is 1943.  Four newly recruited pilots are united by a desire to serve their country, at a time when Black flyers are not welcomed in the Air Force. Now, through the brutal demands of their training, to the perils of flying over nations at war, the men they call "The Tuskegee Airmen" must undertake the riskiest mission of their lives--to prove to America that courage knows no color. Their success could earn them respect, save lives and help win a terrible war. Their failure could destroy more hopes and dreams than their own.

True Whispers : The Story of the Navajo Code Talkers
Explores from the Native point of view the complex story of the role that the Native American code talkers and the Navajo language played in secret communications during World War II. No cryptography system proved as effective during the war as did the use of Navajo code talkers using their tribal language to transmit military communiques. Countless American lives were saved because of the service of these brave young Native American Marines.

African American War Heroes: True Stories of Patriotism and Valor
Through archival film footage, war veterans from all military branches recount their personal experiences to bring their true stories to life, honoring the remarkable contributions of all African Americans who served our country in all our wars.

Centers on the Battle of Midway, a clash between the American fleet and the Imperial Japanese Navy which marked a pivotal turning point in the Pacific Theater during WWII. The film, based on the real-life events of this heroic feat, tells the story of the leaders and soldiers who used their instincts, fortitude, and bravery to overcome the odds.

Sugihara: A Conspiracy of Kindness
This documentary tells the story of Japanese diplomat Chiune Sugihara, consul to Lithuania during World War II. Sugihara defied Tokyo authorities and wrote transit visas that allowed hundreds of Jewish families to flee Europe through Russia to Japan and other countries. Includes home movies, photographs, film footage, and interviews with Holocaust survivors who owe their lives to Chiune Sugihara.

A Matter of Honor: Pearl Harbor: Betrayal, Blame, and a Family's Quest for Justice by Anthony Summers and Robbyn Swan
An account of the Japanese attack on Pearl Harbor in 1941, the 'scapegoat' Admiral Husband Edward Kimmel, the failure of the top brass in Washington to provide Kimmel with vital intelligence prior to the attack, and the continuing efforts of the family to have Kimmel formally exonerated.

Red Tail Captured, Red Tail Free: Memoirs of a Tuskegee Airman and POW by Alexander Jefferson
"This book is one of the few memoirs of combat in World War II by a distinguished African-American pilot. It is also perhaps the only account of the African-American experience behind barbed wire in a German prison camp." "Alexander Jefferson was one of 32 Tuskegee Airmen from the 332nd Fighter Group to be shot down while fighting for a country that considered them to be second-class citizens. A Detroit native, Jefferson enlisted in the Army reserve in 1942, and immediately volunteered for flight training. He joined the Army Air Corps and trained at Tuskegee Institute in Alabama, becoming a second lieutenant in 1943. It was then he joined one of the most decorated units in the War, flying powerful P-51 fighters with their legendary - and feared - "red tails."" "Based in Ramitelli, Italy, Jefferson escorted B-17 and B-24 bombers on missions over Greece, Bulgaria, Poland, Hungary, Germany, and France. In August 1944, on his nineteenth mission - strafing and knocking out German radar stations on the French Mediterranean coast in advance of Allied invasions during Operation Dragoon - Jefferson was shot down by German guns. Captured, he spent the balance of the war in Luftwaffe prison camps, first in Stalag Luft III in Sagan, southeast of Berlin, and later, as the Red Army advanced, evacuated westward to Stalag VIIA near Moosburg. His camp was liberated by tanks from George Patton's 14th Armored Division on April 29, 1945."

Ted W. Lawson's classic THIRTY SECONDS OVER TOKYO appears in an enhanced reprint edition on the sixtieth anniversary of the Doolittle Raid on Japan. One of the worst feelings about that time, Ted W. Lawson writes, was that there was no tangible enemy. It was like being slugged with a single punch in a dark room, and having no way of knowing where to slug back. He added, And, too, there was a helpless, filled-up, want-to-do-something feeling that [the Japanese] weren't coming--"that we'd have to go all the way over there to punch back and get even. Lawson gives a vivid eyewitness account of the unorthodox assignment that eighty-five intrepid volunteer airmen--"the Tokyo Raiders --"under the command of celebrated flier James H. Doolittle executed in April 1942. The plan called for sixteen B-25 twin-engine medium bombers of the Army Air Corps to take off from the aircraft carrier HORNET, bomb industrial targets in Japan, and land at airfields in China. While the raid came off flawlessly, completely surprising the enemy, a shortage of fuel caused by an early departure, bad weather, and darkness took a heavy toll of the raiders. For many, the escape from China proved a greater ordeal. Peter B. Mersky provides new information on the genesis of the raid, places it in the context of the early operations against Japan, and updates Ted Lawson's biography.

Unbroken: A World War II Story of Survival, Resilience, and Redemption by Laura Hillenbrand
On a May afternoon in 1943, an Army Air Forces bomber crashed into the Pacific Ocean and disappeared. Then, on the ocean surface, the face of a young lieutenant appeared as he struggled to pull himself aboard a life raft. So began one of the most extraordinary odysseys of the Second World War as told by the author of "Seabiscuit."

Reports by survivors of a massacre of prisoners in the Palawan, Phillipines, prisoner-of-war stockade prompted U.S. Army leaders to send a small mobile force to another prisoner-of-war camp and liberate the inmates before their Japanese Army guards could repeat the action. The Cabantuan prisoners were the remnants of the benighted force left on Bataan three years before and forced to march without provisions and endure atrocities along the way to their encampment a brutal trek later known as the Bataan Death March. Highly motivated, fit, well provisioned, and trained for this kind of action, the 6th Ranger Battalion had orders to bring out the camp inmates, "even if you have to carry them on your backs." Reinforced with local guerillas, the detachment executed a forced march of 30 miles behind enemy lines in just a day, then organized the attack and-.Since this story is written in a voice that makes us continually guess the outcome, it would seem unfair to continue with a story outline. Outside contributor Sides (Stomping Grounds) gives us insight into the hardships of such a venture, and with recollections from the participants and historical background this becomes a richly written document of the last year of World War II.