In honor of Ray Bradbury's Centennial celebration, the Waukegan Public Library is giving the public a look into Bradbury's personal collection which was donated to the library at his passing. 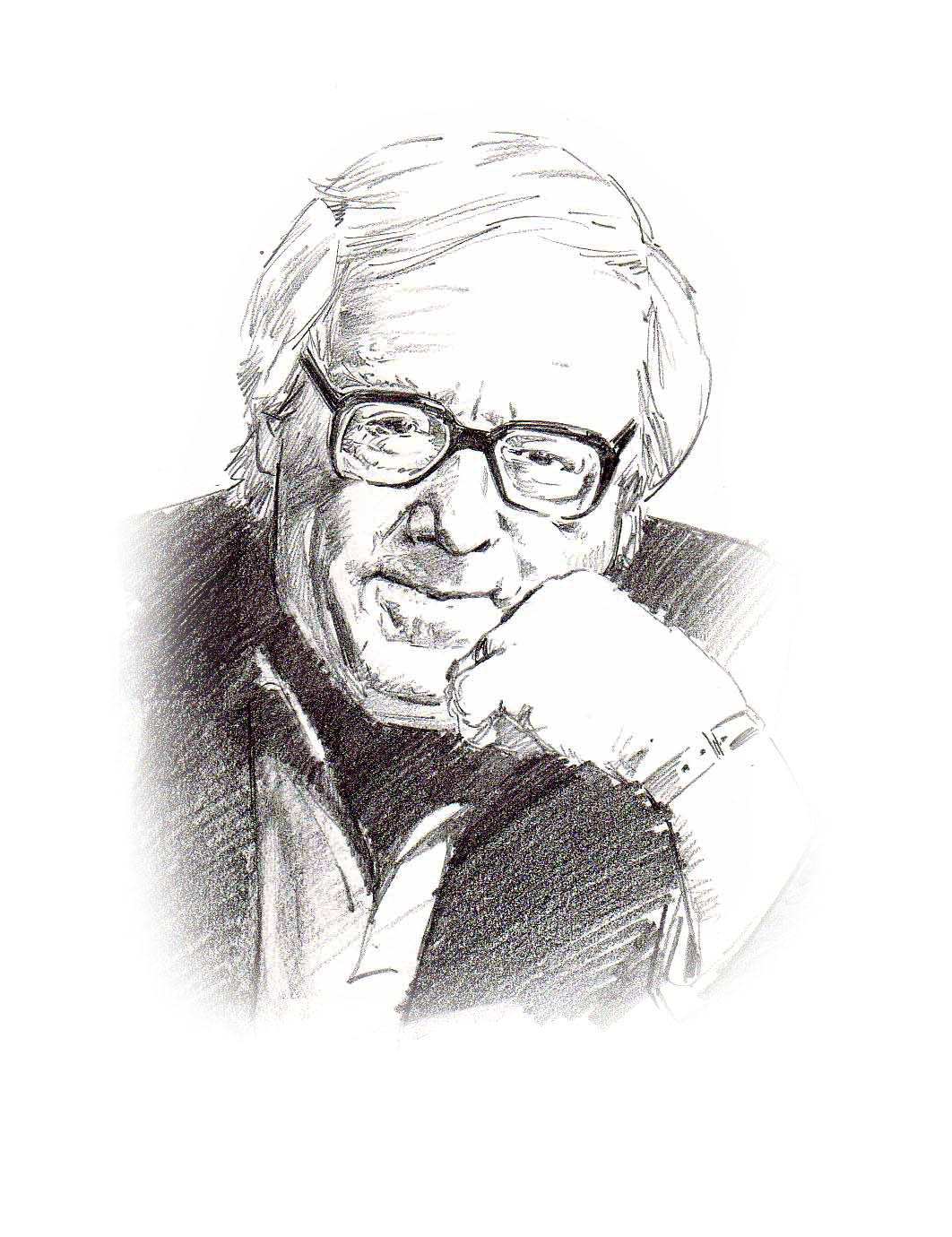 Below you will first find books written by Ray Bradbury, then books in the collection from other authors, and lastly non-book items. 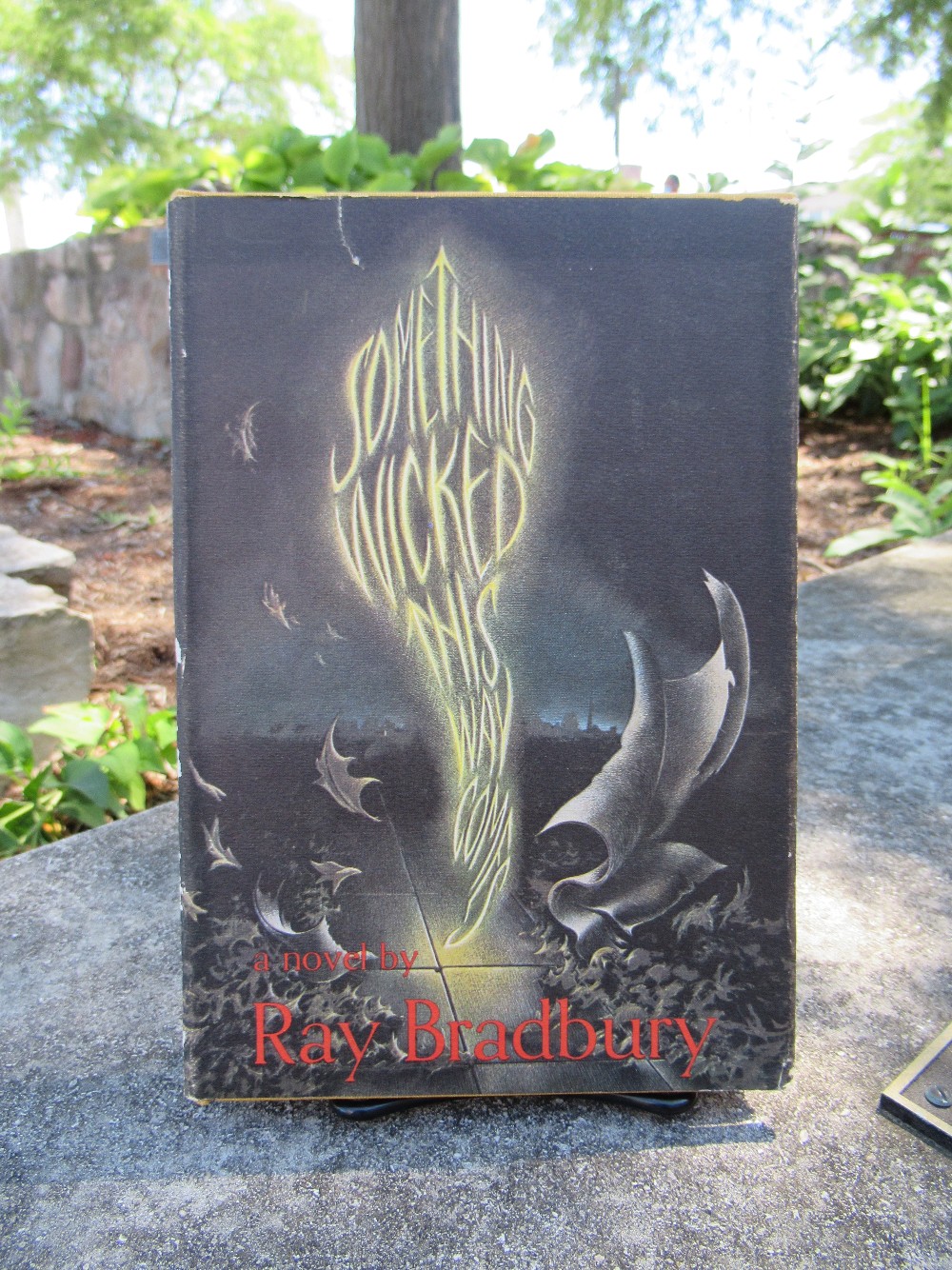 Based in the city of “Greentown, IL” Something Wicked This Way Comes is a creepy story about the experiences of two young teens at a traveling carnival led by the mysterious Mr. Dark. This work is revered as a classic in the horror and fantasy genres, and is noted for flawlessly combining the two genres. This book has also been a direct influence for some of Stephen King’s works. Here we have two significant copies of the novel: The first is a first edition copy that appears to have been gifted to Ramona Bradbury, Ray’s daughter, from Ray in 1966. The second copy is an ultra-rare, being 1 of only 52 lettered copies (this one being PC for personal copy), special deluxe edition signed by Ray Bradbury, Joe Lansdale, and Peter Crowther.

In this work that Bradbury released later in his life in 1992, he gives a fictionalized account of his experiences in Ireland in the 1950s. Bradbury traveled to Ireland to write the screenplay adaptation for the famous novel Moby-Dick. The work mostly contains short stories that Bradbury claims were inspired by the time that he had spent in the green country of Ireland. This particular copy is the very first copy printed of this book, and it is signed by Ray Bradbury. 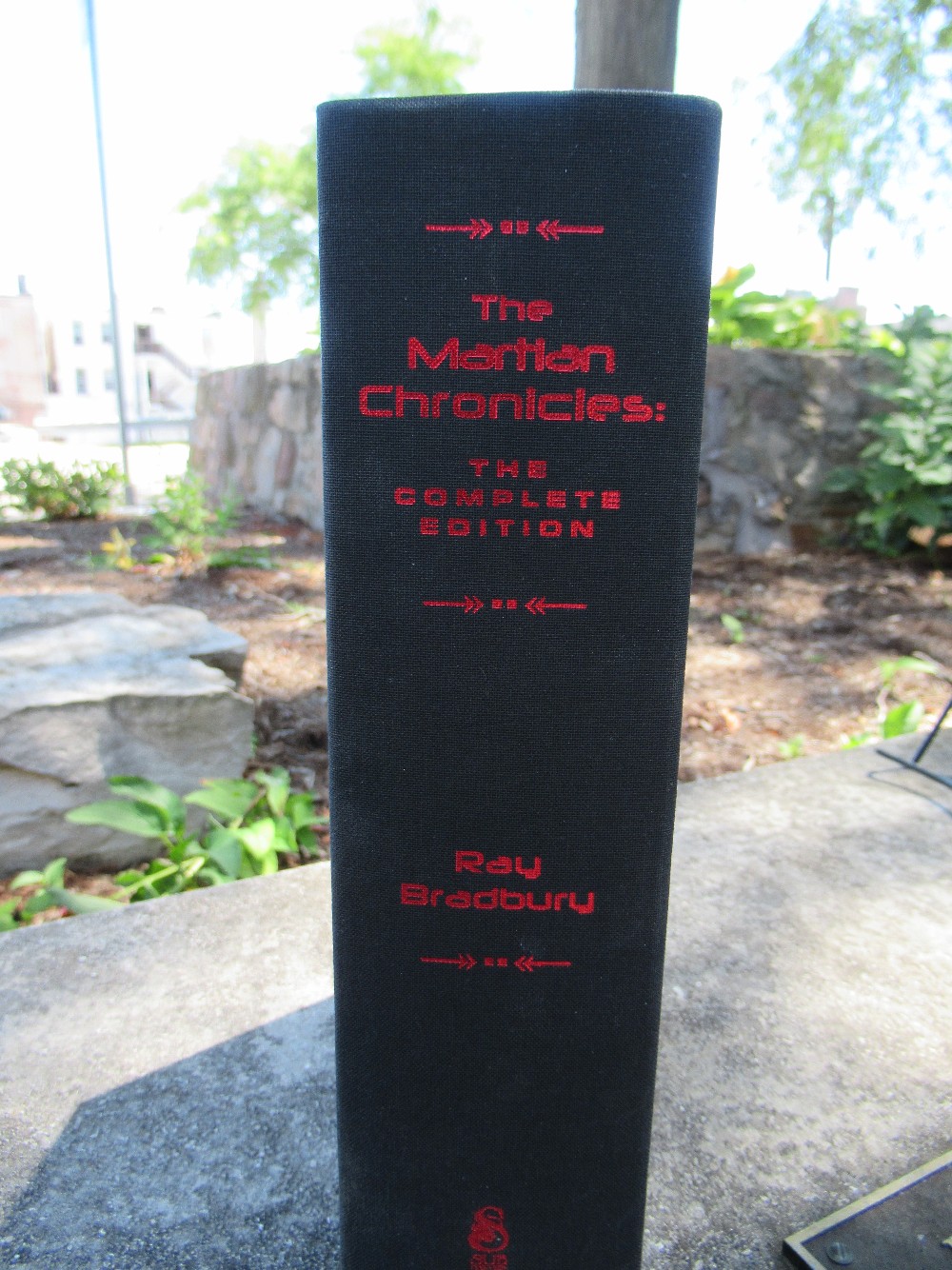 One of Bradbury’s better known space-themed science fiction works, The Martian Chronicles is the story of a group of refugees from Earth who colonize the planet Mars. The work can be described as a collection of short stories, but is really more like an episodic novel, meaning that the short stories build on to one another. Stories like the ones in The Martian Chronicles gave Bradbury the reputation of being obsessed with space and anything involving alien life. There are countless works in the Ray Bradbury Collection here at the library that were gifted to Bradbury by other authors on the subject, one of which is highlighted in this showcase. The work was adapted into a short TV series in 1979 by the NBC and BBC networks, and the screenplay was written by Bradbury’s good friend Richard Matheson, the author of What Dreams May Come. This complete edition was published in 2009 and was signed by Ray Bradbury. 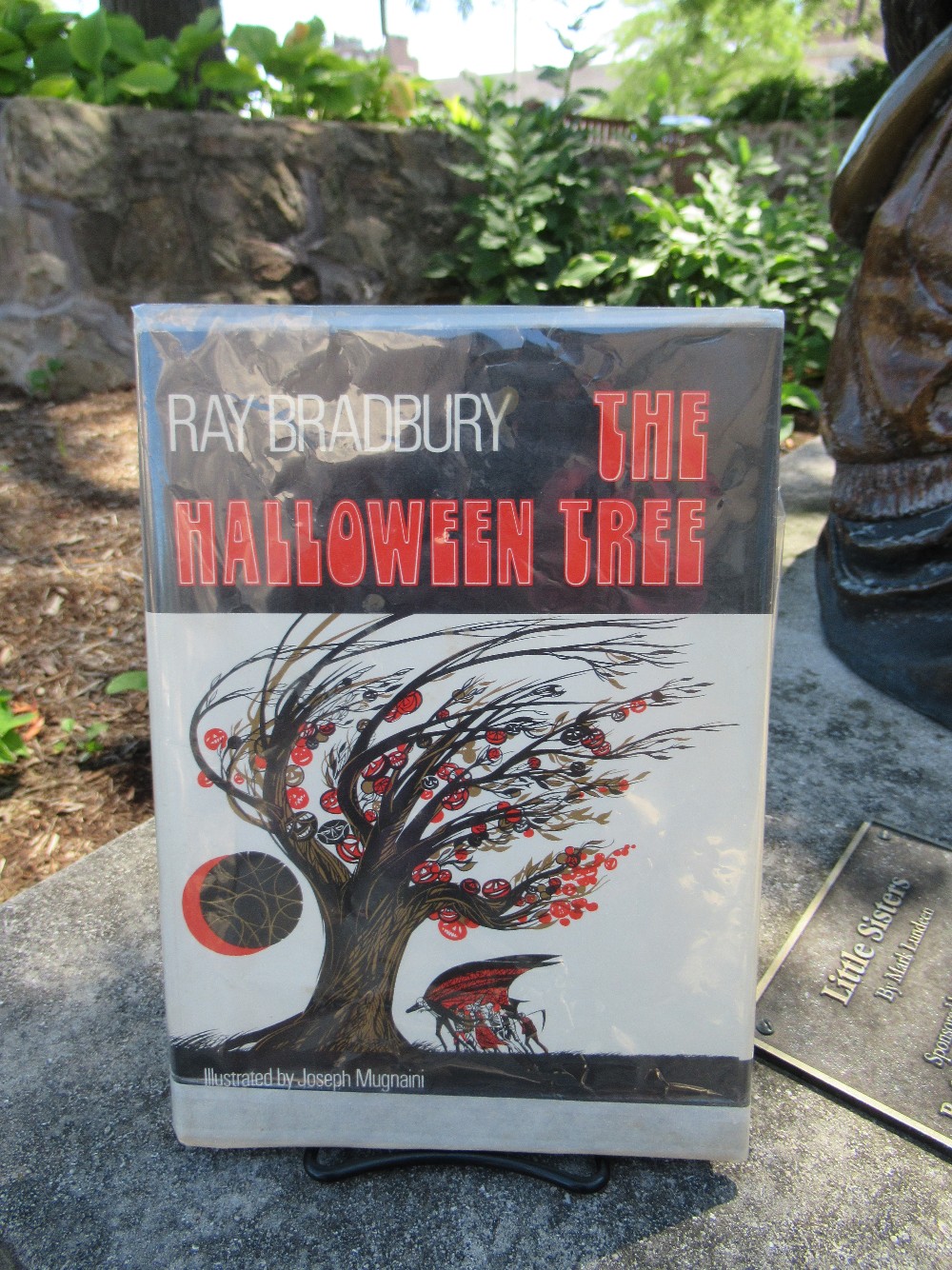 In this short novel by Bradbury, he decided to target a younger audience, saying that he wanted to write it for children of all ages. The story follows a group of adolescents through space and time as they learn more about the origins of the Halloween holiday and save their friend’s life. The book was adapted into an animated television movie in 1993, it has aired on TBS and Cartoon Network. This copy is special because it is the very first copy printed of The Halloween Tree and it is signed and dated by Ray. 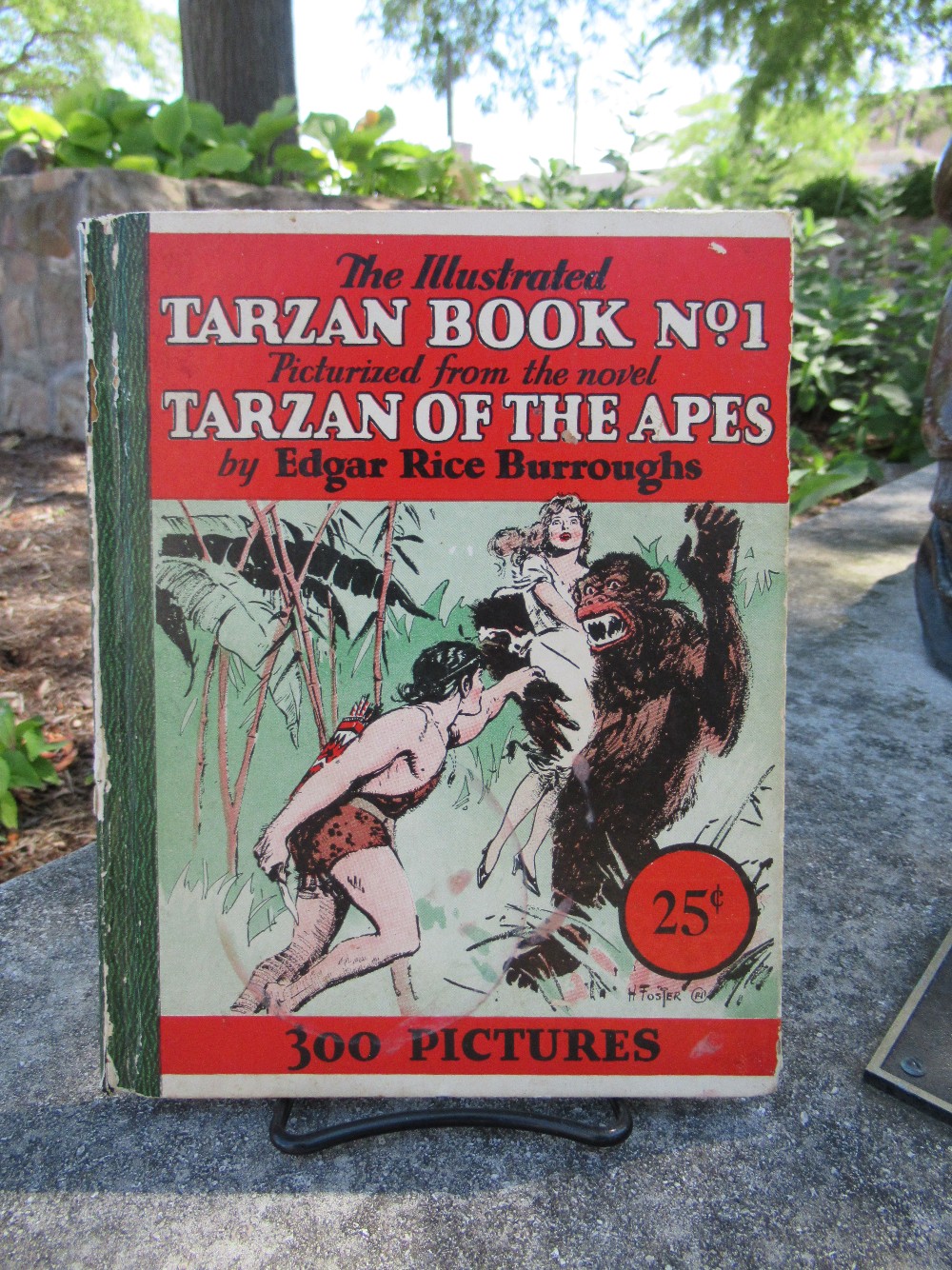 This item is among some of the more meaningful and significant things in the entire collection because it is from Ray’s childhood. Evidently one of Ray’s favorite authors as a child, Edgar Rice Burroughs, was the original creator of the Tarzan character. Ray had many of Burroughs’ novels growing up, this one you can see was signed by an 11-year old Ray in June of 1932. This particular work is a picturized version of one of Burroughs’ novels, it is easy to see why Bradbury pursued having a lot of his works picturized and adapted into so many formats. 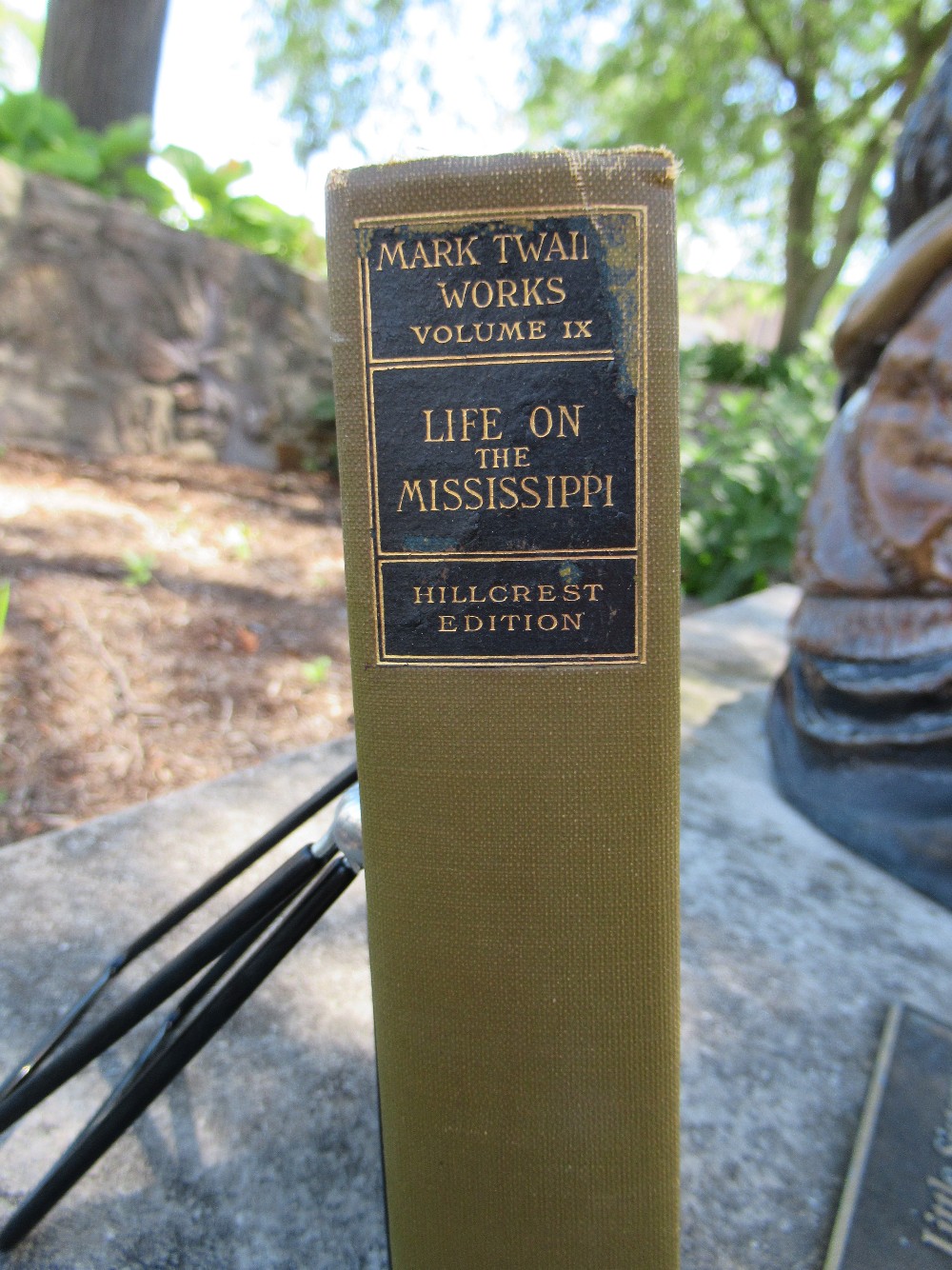 Life on the Mississippi is a autobiographical memoir written by renowned American author, Mark Twain. This work is often considered to be one of the first by Twain to draw serious recognition to his writing abilities. The experiences of his life as a steamboat pilot discussed in this book are thought to be what influenced the main ideas in perhaps his greatest work, The Adventures of Huckleberry Finn. This particular copy boasts a signature by Mark Twain himself, which Bradbury likely purchased from a collector or was given as a gift. 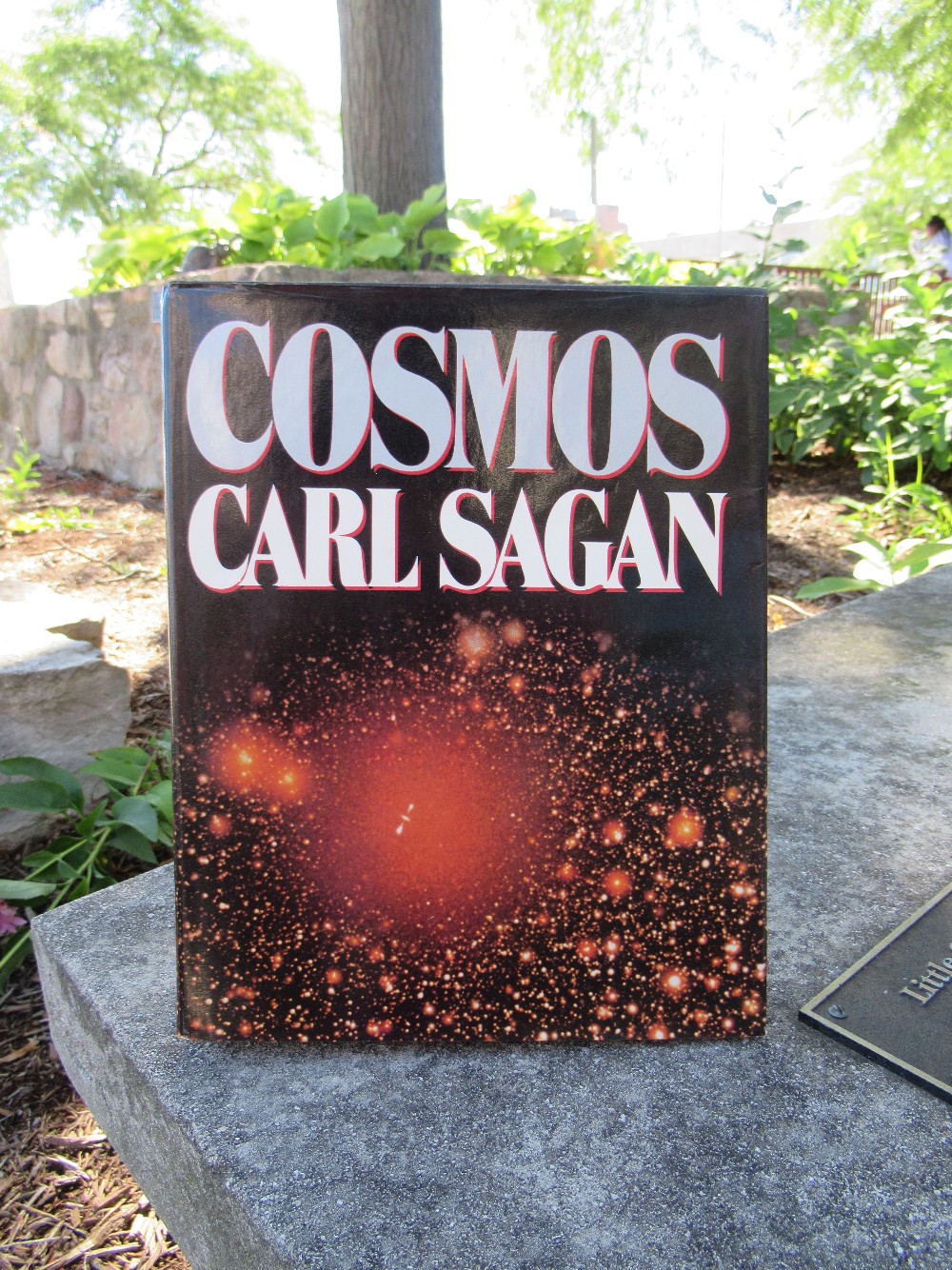 Famous American astronomer and astrophysicist Carl Sagan is legendary due to his contributions to the field. Aside from his more serious scientific studies, Sagan also wrote works that were meant to appeal to the common, non-scientific community. Cosmos is one of those works, and this copy is very special because it has a personalized note to Ray Bradbury, and of course Sagan's signature. This is one of many books on the topic of outer space that were gifted to Bradbury and are now in the collection held in our library. 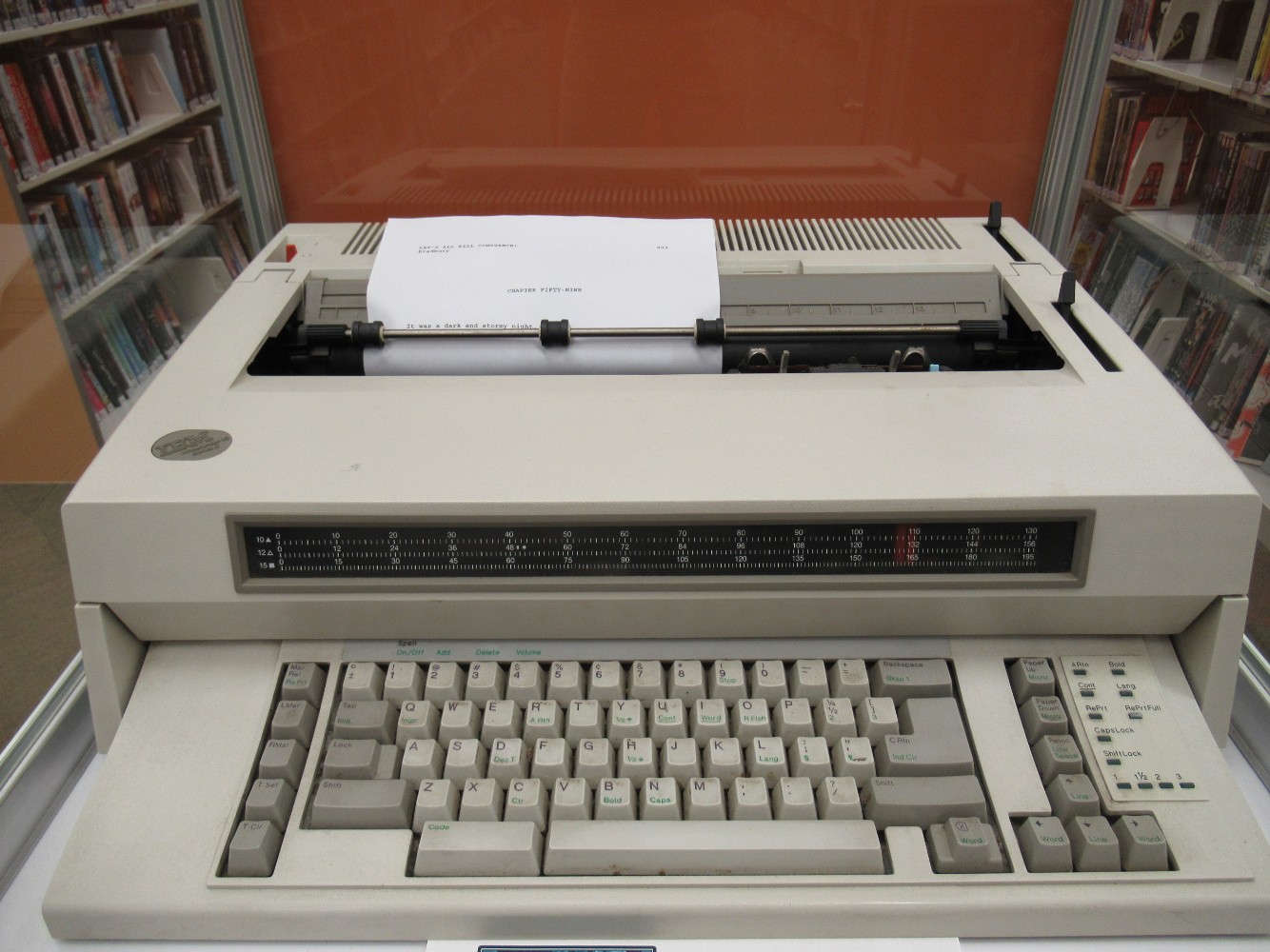 This is the last typewriter that Bradbury used at his home in  California before he passed. 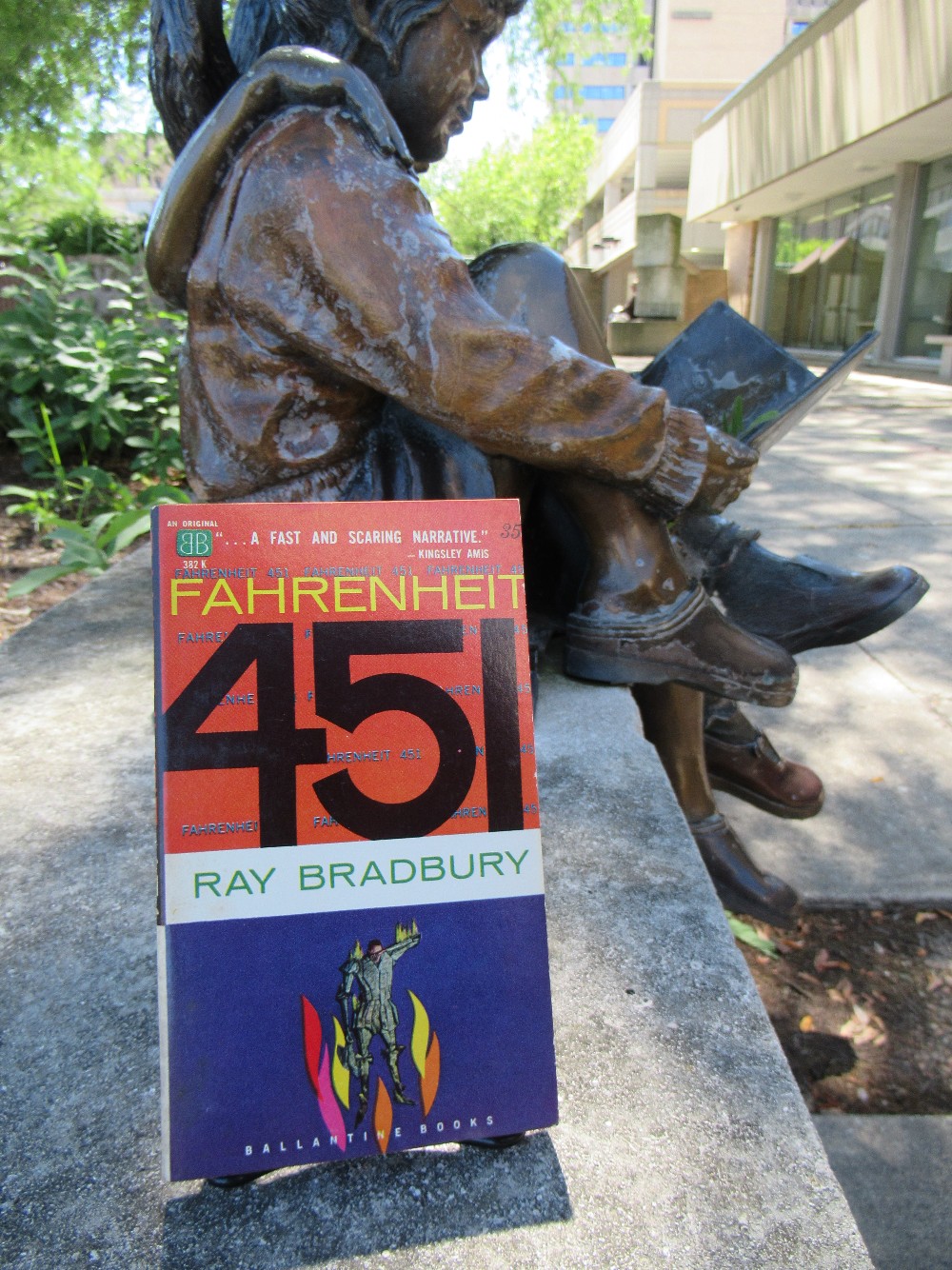 Widely considered as Bradbury’s masterpiece, Fahrenheit 451 warns us of a horrifying future, a true dystopia. The novel is set in the 24th century, and depicts a society where citizens are not allowed to think for themselves and every aspect of their lives is controlled and censored by the government. The work is titled after “the temperature at which book paper catches fire and burns,” and follows Guy Montag, a "fireman" who burns books for a living. This particular copy is a first edition, printed in 1953 when Bradbury was only 33 years old. 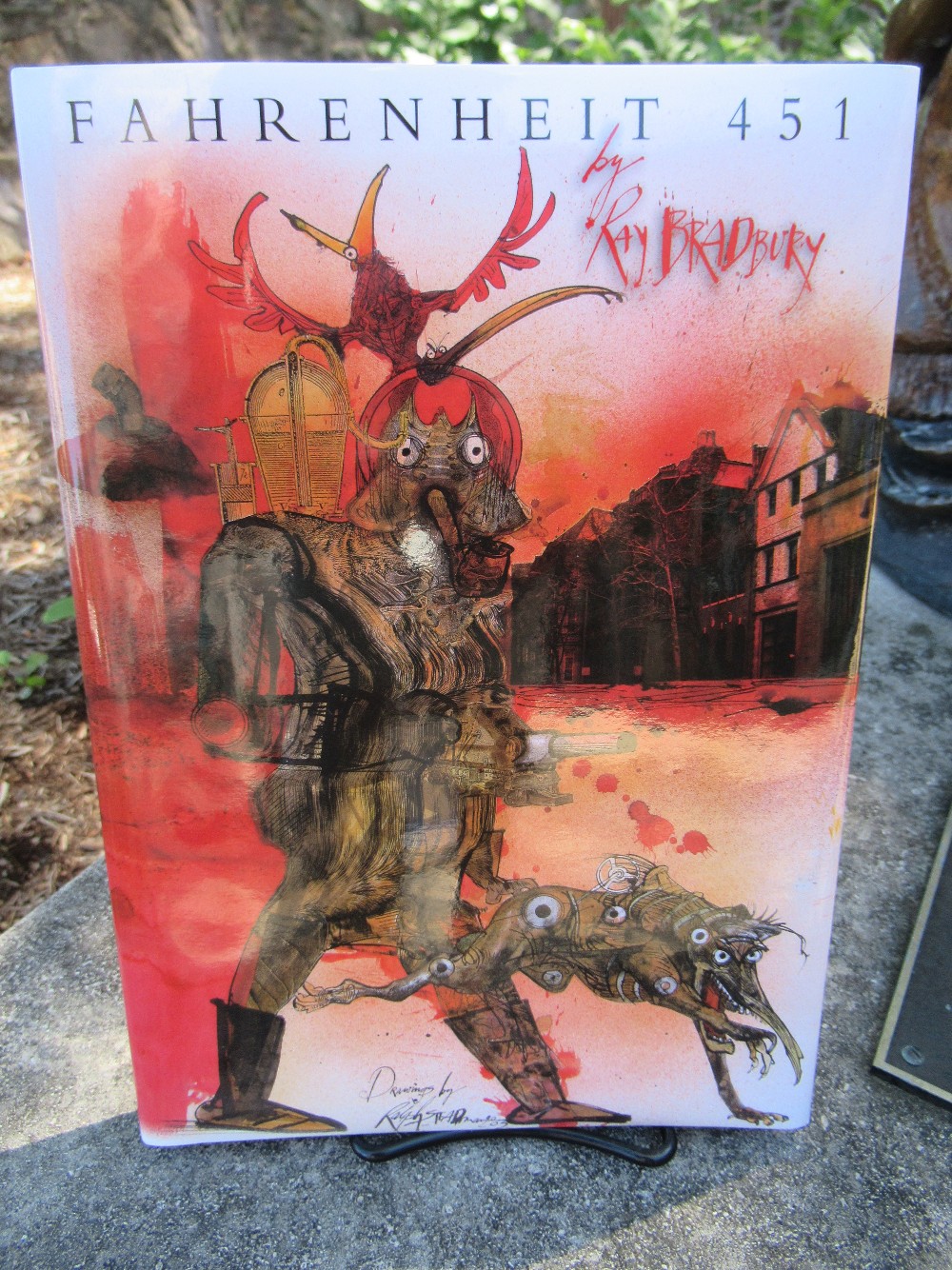 This amazing 50th anniversary edition of Fahrenheit 451 features dark and twisted illustrations by the great British cartoonist Ralph Steadman. As an homage to the title, only 451 copies of this special edition were printed, each signed by both Ray Bradbury and Steadman. Steadman brings to life all of the major characters and scenes that Bradbury describes, with his own flare and interpretation. The final product being a gruesome depiction of the dystopian society that Bradbury engineered. This copy includes a separate print of “The Hound” (Image 11), also known as the Mechanical Hound in the novel, an apex predator created by the government for the sole purpose of hunting down citizens who break the rules. 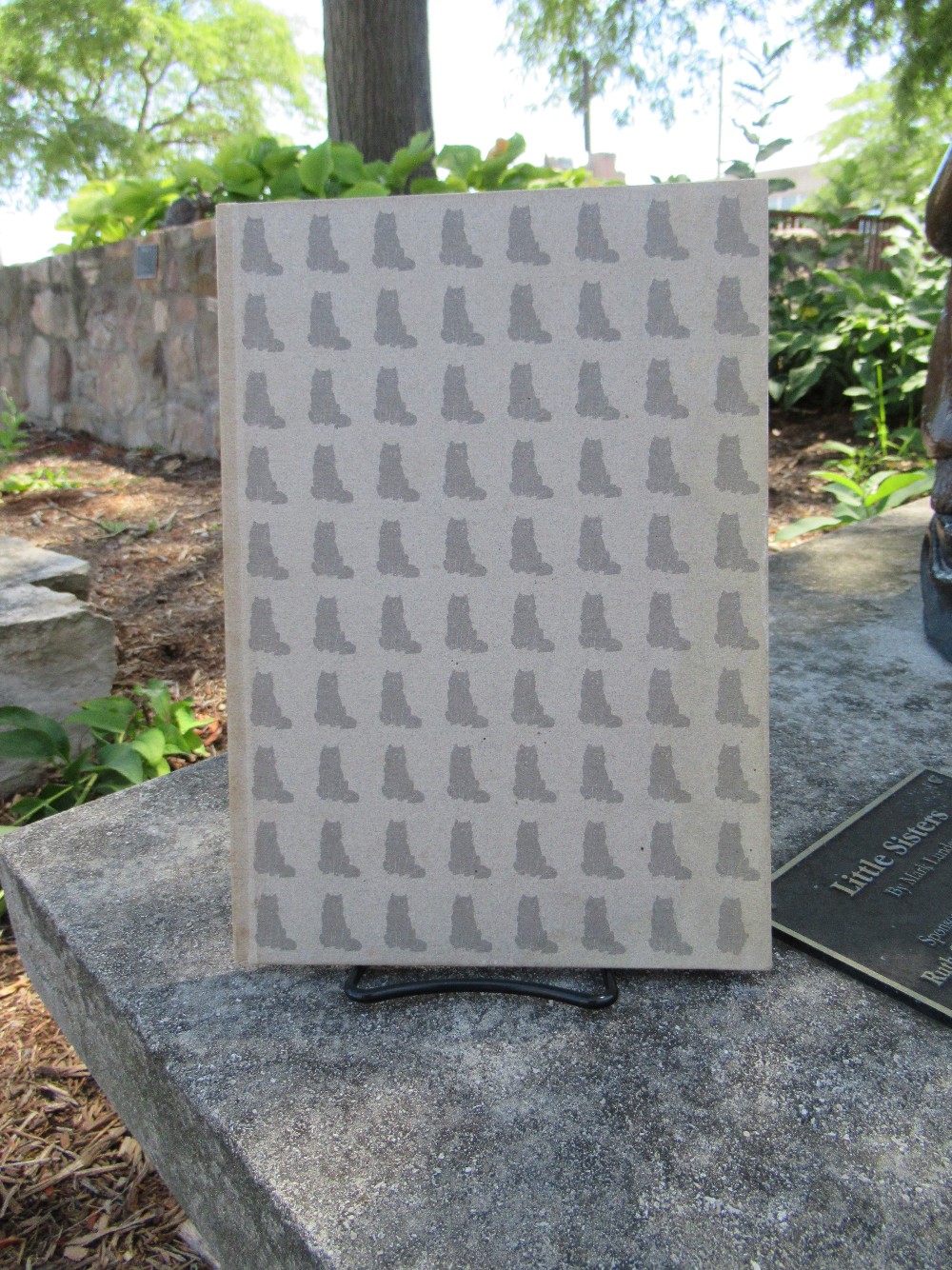 Not only did Ray Bradbury write novels, short stories, and screenplays, but he also dabbled with writing poetry. This work is one such example of his escapades in poetry. Published in 1987, this first and only edition of Death Has Lost Its Charm For Me is a collection of poems featuring pictures of cats by Bradbury on topics reminiscent from his childhood and his family-life. If you look closely at the cover, you can see that the pattern is actually made up of the same fluffy cat image over and over. This copy of the poetry collection was signed by Ray Bradbury. 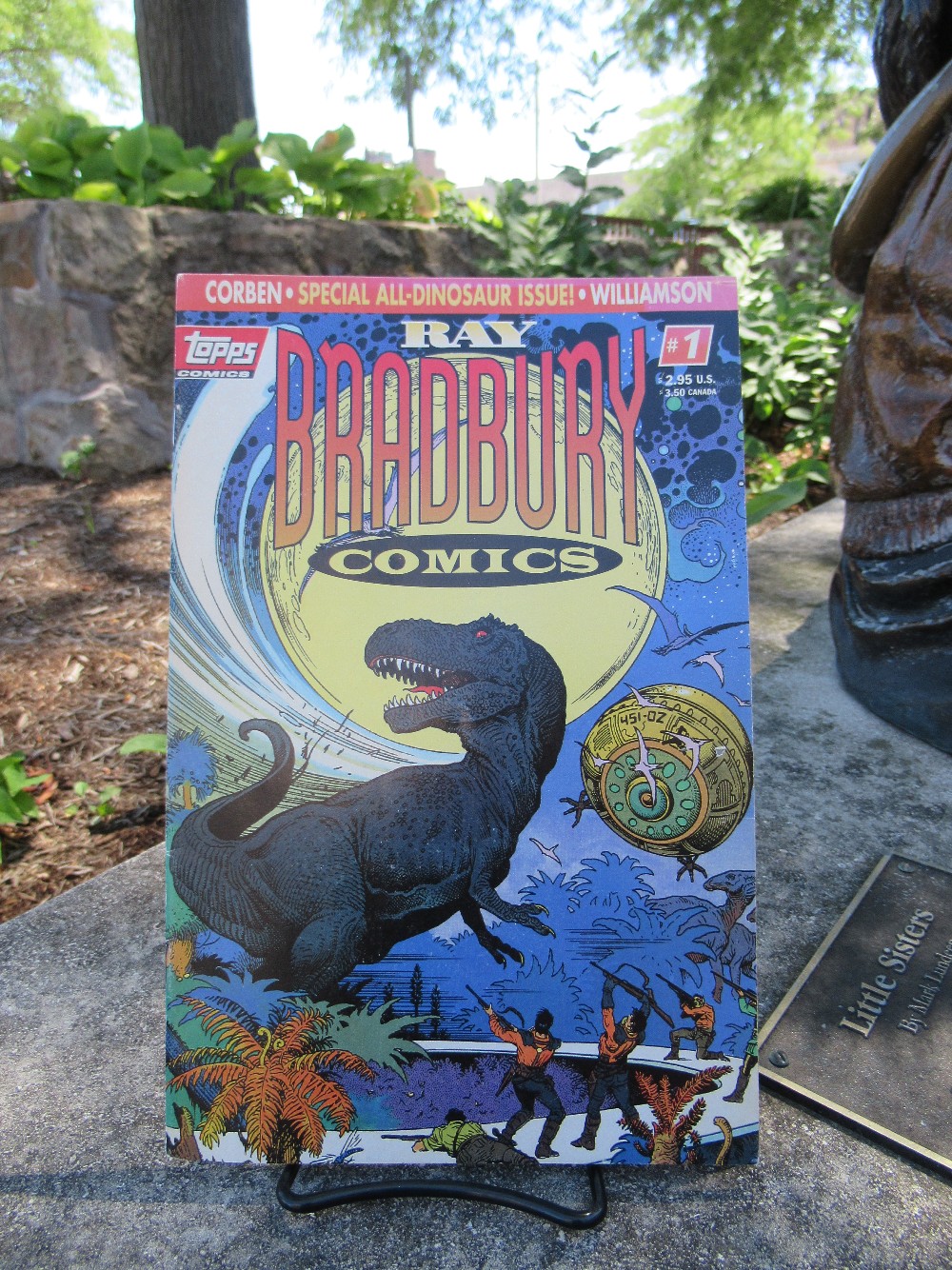 Among Bradbury’s many science fiction passions, dinosaurs were also the topics of some of his short stories. This comic book, published in 1993, includes adaptations of some of Bradbury’s short stories specifically on dinosaurs, most notably “A Sound of Thunder.” This is just one instance of the Ray Bradbury Comics series, there were several others released focusing on other stories. 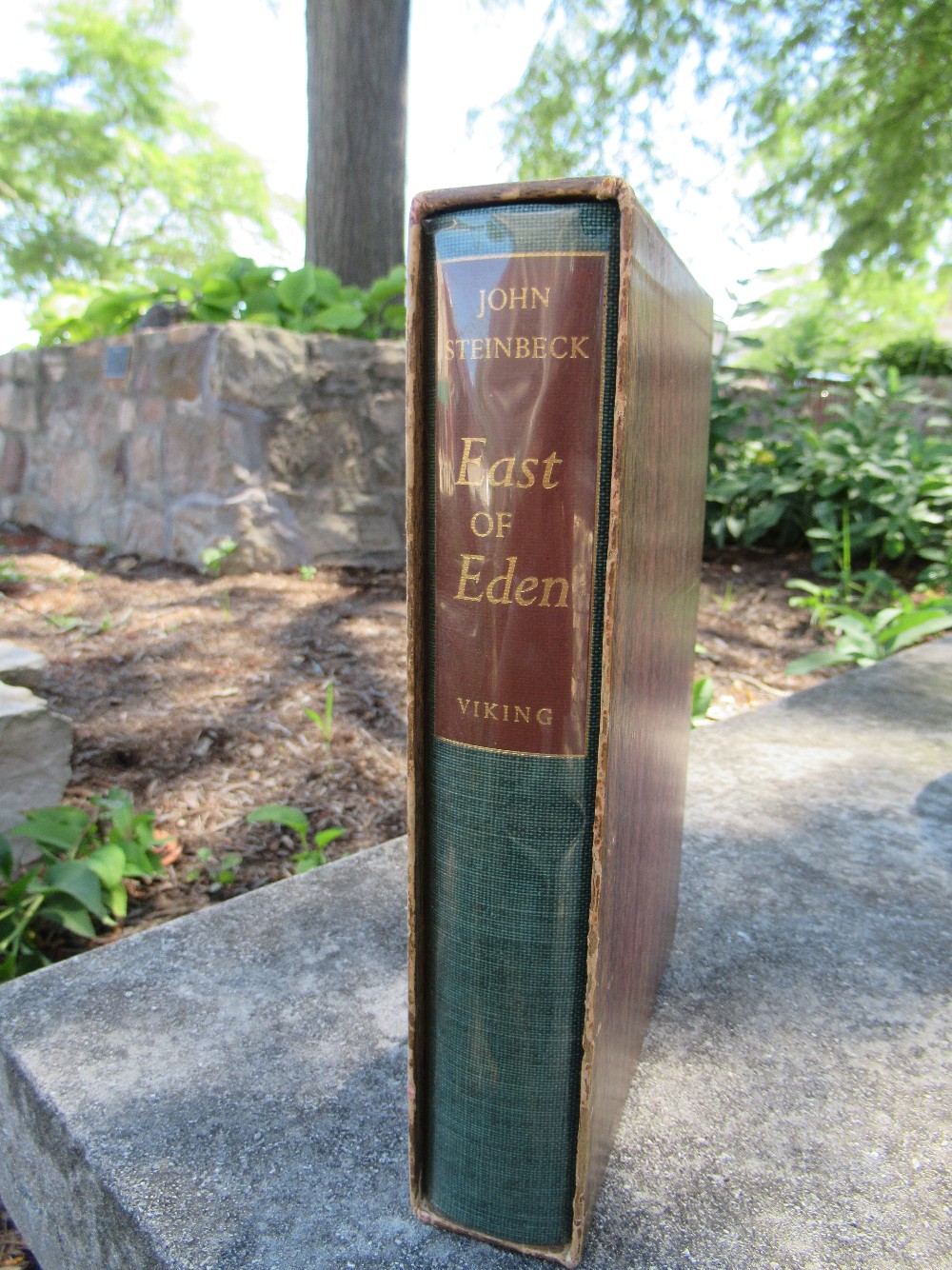 This book is exceedingly rare, being 1 of only 1500 copies like it. Even though Nobel Prize-winner John Steinbeck is better known for The Grapes of Wrath and Of Mice and Men, his later novel East of Eden is still considered a classic. Basically a modern play on the Book of Genesis, this work focuses on the struggle between two families in California over the course of two generations. 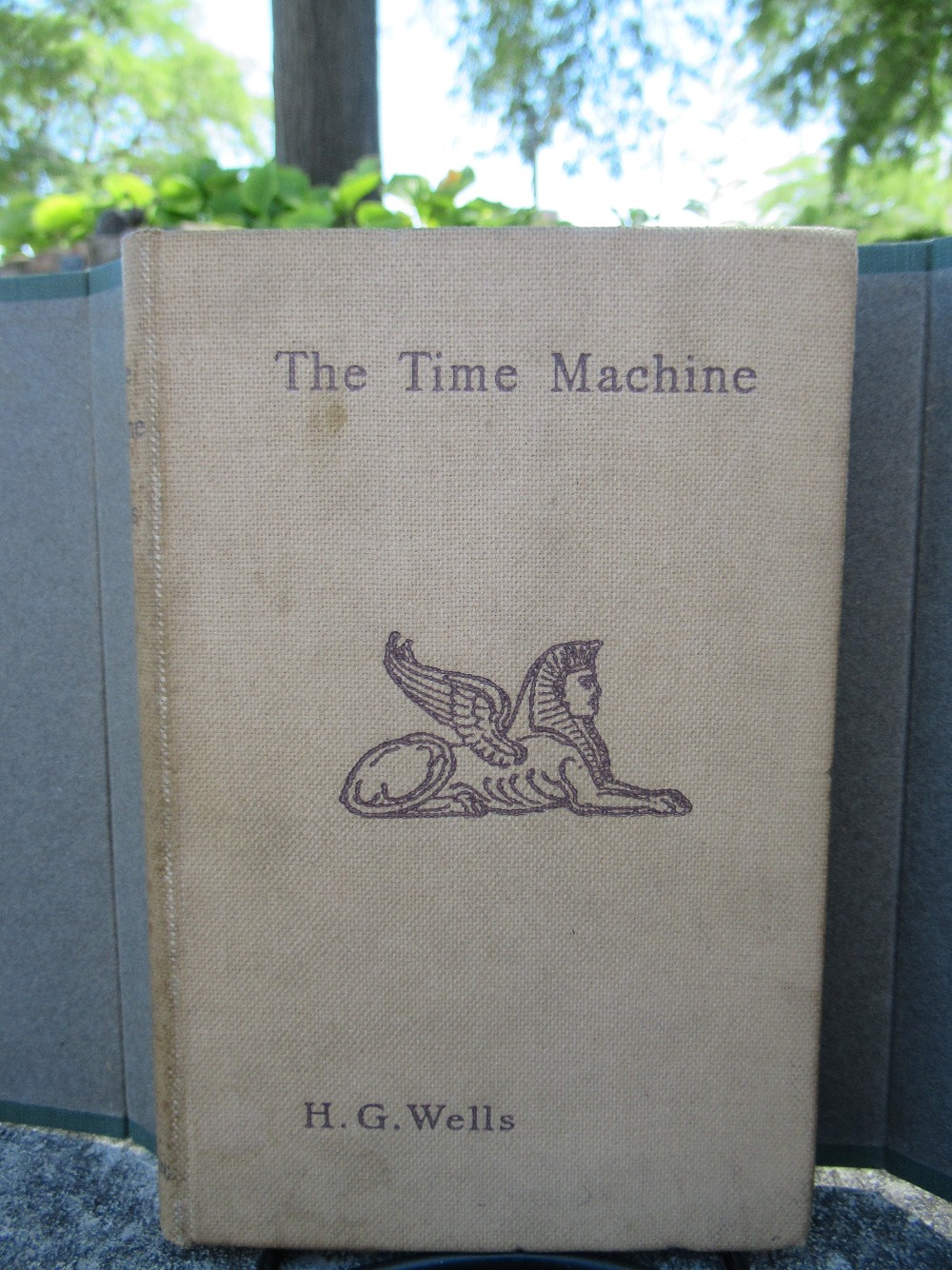 Known to many as the “Father of Science Fiction,” H. G. Wells is often credited for founding the genre, along with Jules Verne. The Time Machine was his second novel published, and what launched his career in writing. Wells was the first author to popularize the idea of a vehicle or device that can concisely and accurately travel through time, giving inspiration to countless other science fiction works. The books of H. G. Wells paved the way for authors like Bradbury to prosper, giving it further significance to this collection. This first edition was published in 1895, making it over a century old and it is still in its original binding. It appears that Bradbury procured this item in 1941. 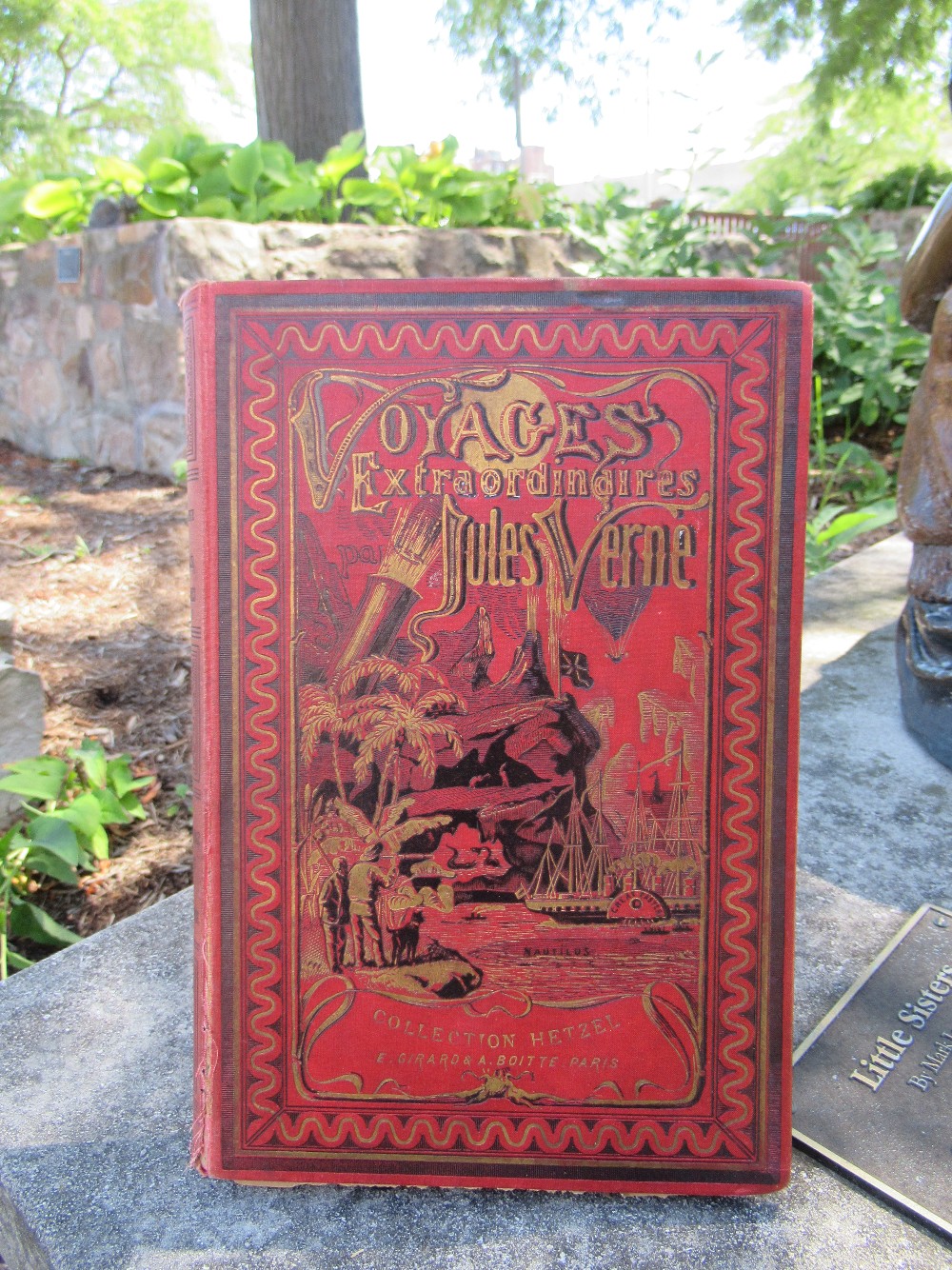 Ray Bradbury often cited Jules Verne as one of his sources of influence and inspiration. As mentioned above, Jules Verne is credited as being one of the original creators of the science fiction genre, alongside H. G. Wells. This is a beautiful early edition of Voyages extraordinaires (translated Extraordinary Voyages/Journeys), which was a series of sequential novels written by Jules Verne and published by Pierre-Jules Hetzel. This copy lavishly published in 1880, includes Le tour du monde en quatre-vingts jours, known in English as the classic story Around the World in Eighty Days. 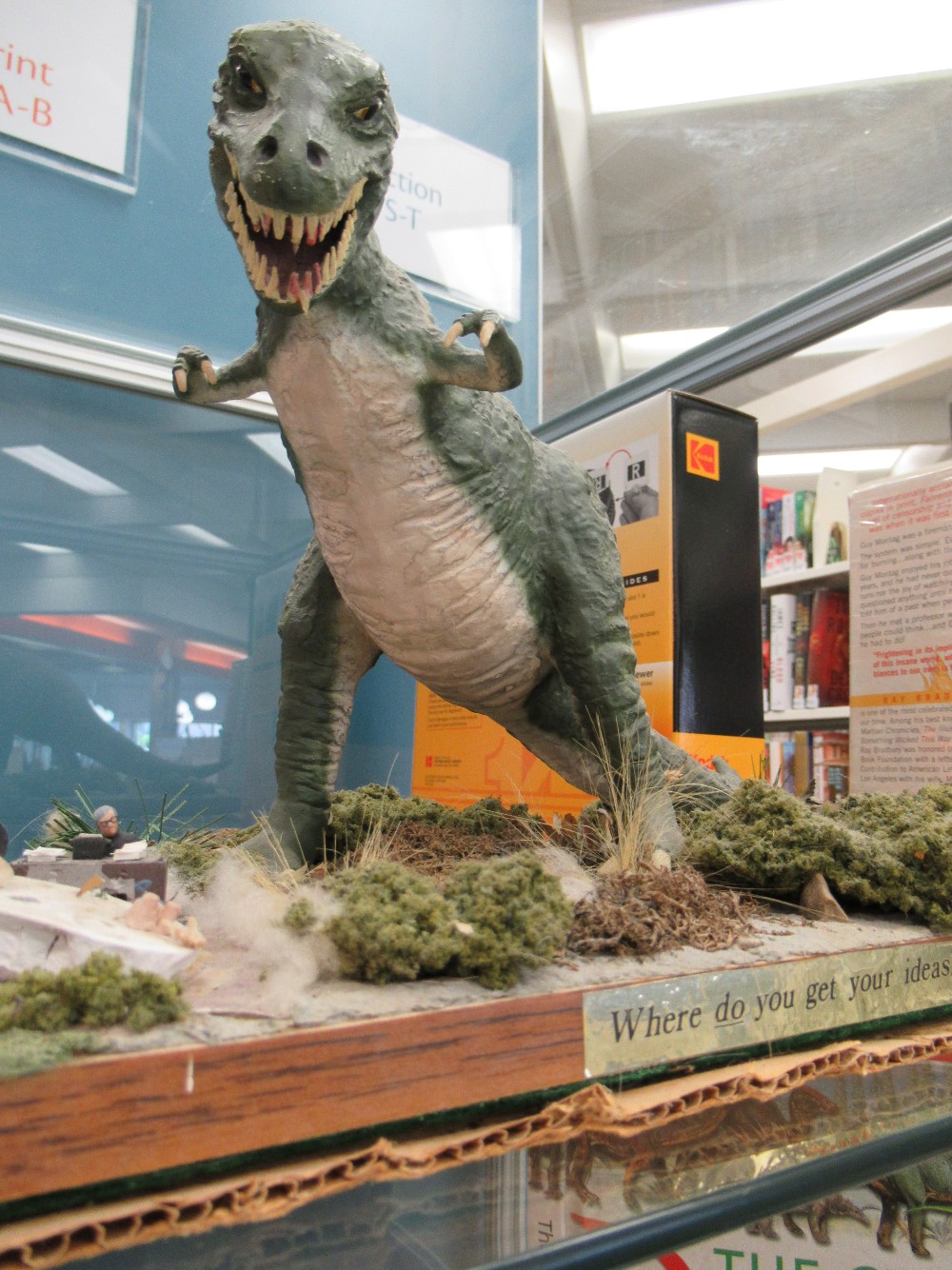 The story behind this interesting item in the collection is that whenever Ray was experiencing writer’s block, he would take a minute to hangout with this dinosaur figurine. By clearing his mind and focusing on something else that he enjoyed, he was able to then cure himself of the hindrance. The plaque on the front asks "Where do you get your ideas?" 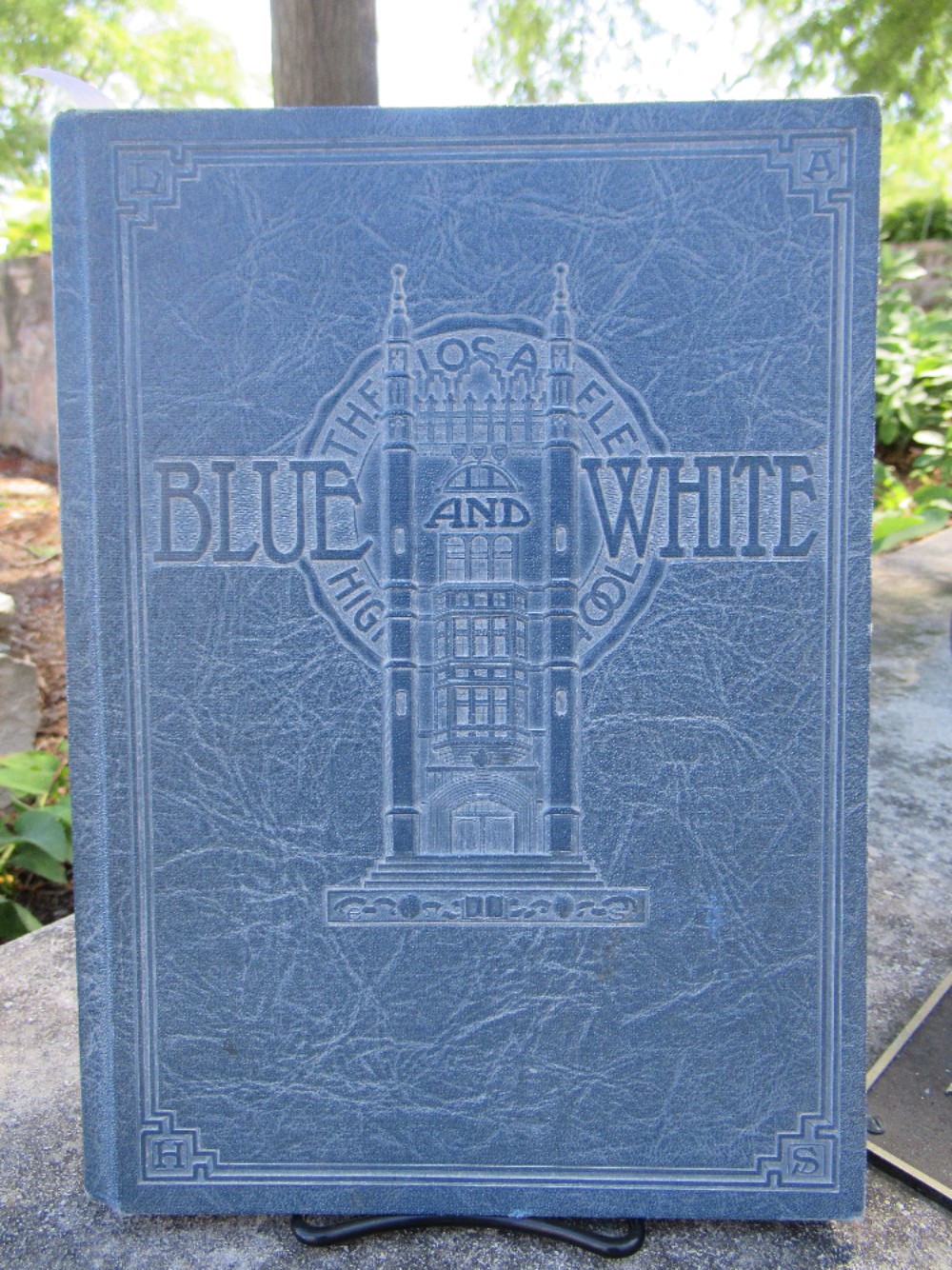 This is the 1938 Los Angeles High School Yearbook, which Bradbury graduated from. You can see that the people making the yearbook were privy to his literary talent, because they stated that he was "headed to literary distinction" (Image 49).